Today the United States Patent and Trademark Office granted Apple a patent for a possible future MacBook built with a glass form factor, including the keyboard area which will include bendable flat glass which may or may not have protrusions that define distinct key regions of the keyboard. Apple isn’t that bold and instead sticks to evolutionary changes to the MacBook, but that could change.

A rumor surfaced in late June claiming that Apple was working on a 12-inch MacBook. Could this be where a new form factor could be introduced? Probably not, although Apple’s patents hint that a new “laptop-like” device is in the works.

The patent granted today shows us one option while a large foldable iPad that could serve as a laptop-like device is another. Apple also has a few other patents pointing to a keyless laptop form factor (01 and 02). In addition, the use of glass forming the case of a future iMac, as shown below, has been patented. Thus, the use of glass embodiments in the future is a real possibility.

Apple’s newly issued patent covers a future MacBook or MacBook-like device that may include a display portion that includes a display housing and a screen at least partially within the display housing. The device may also include a base portion pivotally coupled to the display portion and including a lower housing, an upper glass housing coupled to the lower housing and defining an array of raised key regions, and a sensing system under the upper glass case and configured to detect an input applied to an elevated key region of the array of elevated key regions.

For example, the glass sheet can be reinforced glass having a thickness of about 40 microns or less. Due to the thinness and flexibility of glass, when a typical striking force is applied to the thin glass sheet (e.g., via a finger), the glass can be mostly deformed directly under the force (e.g., under the finger) while other areas of the glass sheet remain substantially undeformed or less deformed.

Local deformation of thin glass may provide a more satisfying typing experience than thicker or less flexible glass, as the user may actually experience a similar or reminiscent deformation or depression of a conventional moving-key keyboard.

Raised key regions can provide a more familiar keyboard surface to users, as individual key regions can have a similar shape and feel to conventional movable keys. Additionally, a user may be able to type faster and with fewer errors because they can feel the borders and boundaries of each key region and do not need to look at the keyboard to align their fingers with the keys. . The ability to sense distinct key regions can also help prevent a user’s hands from unintentionally drifting out of position while typing.

Apple’s patent FIG. 1 below represents a notebook (#100) may include a glass cover. In particular, a basic part (#104) of the notebook may include a top case (#112) which is formed at least partially of glass and which defines a keyboard and possibly other input regions (for example, a touchpad or a touch input area) of the device; FIG. 9A shows another example of a glass top case configuration. FIG. 10A shows an example cross-sectional view of a double-layered glass top case. 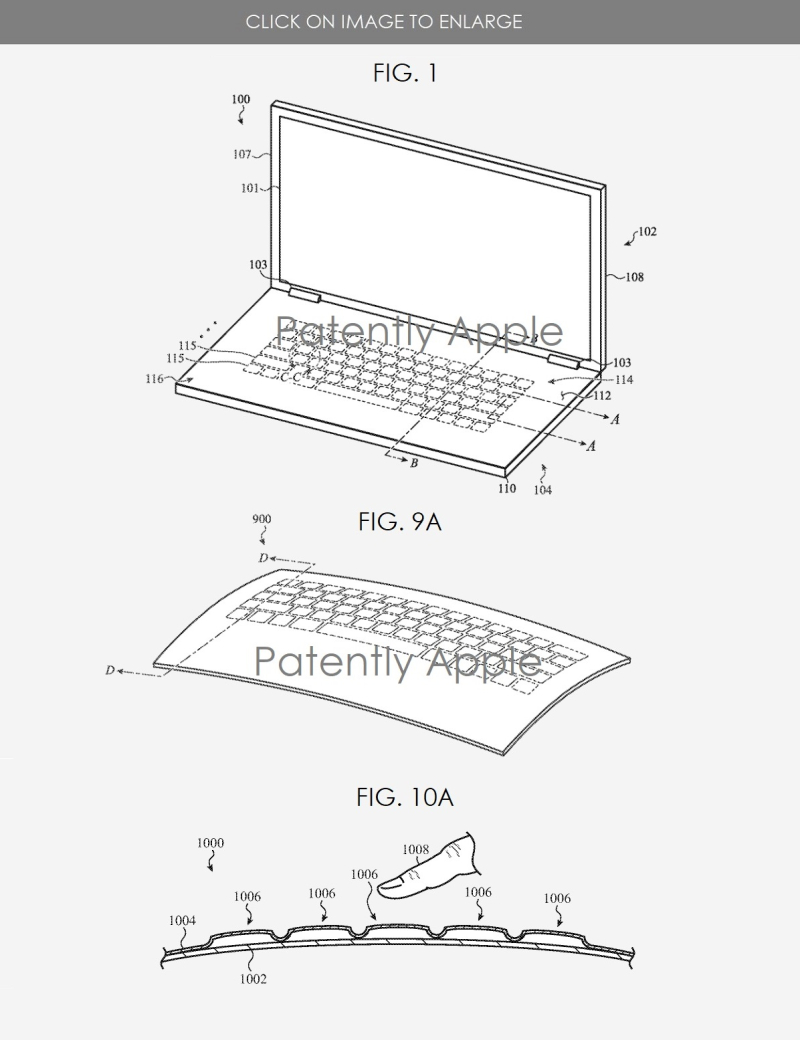