Carbon capture and storage (CCS) involves removing carbon dioxide from emissions, pressurizing it in a “supercritical fluid”, then pumping it deep underground into reservoirs of porous rock, where it will, in theory, remain buried.

Although CCS technology has been around for decades, it has not yet been widely adopted. This is partly because of the high cost of building sequestration plants, but also because of lingering questions about how the process actually works.

Over long periods, even a small amount of carbon dioxide leakage can become significant, and when storage sites are below the seafloor, the leakage can have profound effects on marine life.

Leak detection alone is difficult and costly. CCS monitoring typically relies on heavy seismic equipment mounted on trucks or ships. The equipment sends powerful vibrations into the earth’s crust and analyzes the sound waves that are reflected.

Due to the high cost, such systems can only be used for limited periods of time. “In a conventional system, monitoring is discontinuous,” said Takeshi Tsuji, professor of engineering at the University of Tokyo. “It is difficult to acquire seismic data continuously.”

Japan’s ambition to explore the solar system, however, may have led to a breakthrough for carbon storage here on Earth.

A team from the University of Tokyo and Kyushu University, led by Tsuji, has developed a lightweight system, the Portable Active Seismic Source (PASS), designed to be carried aboard Martian and lunar landers that can also detect carbon leakage at sequestration sites.

The PASS, which is only 10 centimeters long, creates vibrations by means of a spinning wheel mounted with an off-center weight. 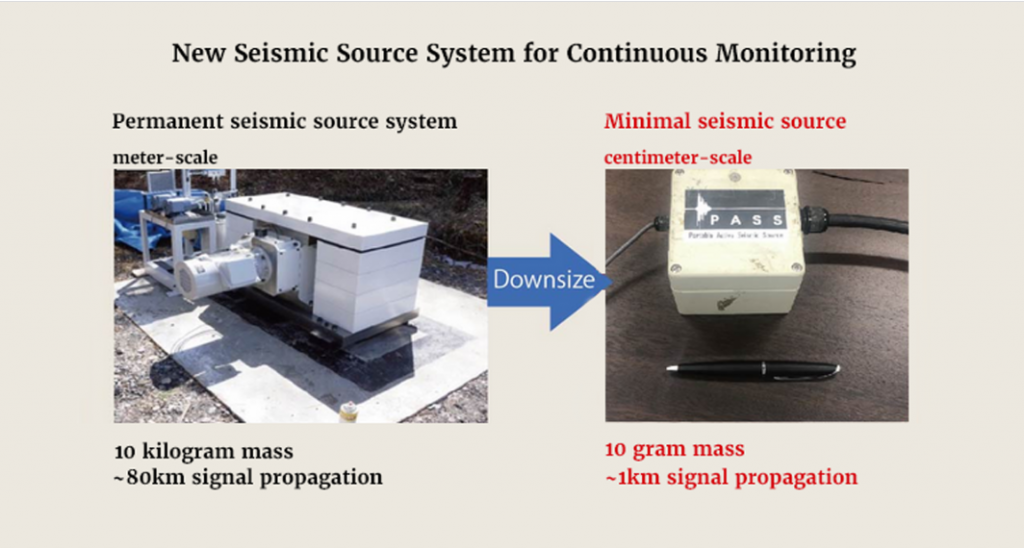 Due to the device’s small size, the vibrations it produces are relatively small, but the team uses software to “stack” hundreds of signals, greatly amplifying the transmission.

Stacked seismic signals are capable of penetrating more than 800 meters underground. CCS wells must be this deep to keep the carbon dioxide under pressure. In theory, arrays of PASS boxes can be deployed above these sites, allowing geologists to monitor carbon leakage.

“This system is very cheap,” Tsuji said, “and it generates continuously, so we’ll be able to monitor continuously.”

PASS boxes could help Japan reach its ambitious goal of being carbon neutral by 2050. As part of this goal, the country plans to sequester up to 240 million tons of carbon dioxide per year in hundreds of wells, mainly offshore.

Toru Sano is a geophysicist with JX Nippon Oil & Gas Exploration, a Japanese company that is considering integrating CCS into its operations. He said PASS’s small size and low cost make it ideal for long-term monitoring of sequestration sites. “We have to monitor not only the injection period,” he said, “but also after the site is closed, for maybe 10, 20 or even 50 years.” Ongoing monitoring, he said, is also important to manage public perception about the safety of carbon capture sites.

Although some critics accuse Japan of pursuing carbon storage as a way to continue extracting and burning fossil fuels while meeting its net-zero carbon goals, the United Nations Intergovernmental Panel on Climate Change considers that CCS is essential to limit global warming. According to his most recent climate change reportthere are more than enough potential carbon storage sites on Earth to hold all the carbon dioxide needed to limit warming to 1.5°C, but technology deployment is currently well below what is needed to reach this goal.

This article from Eos is published here as part of the global journalism collaboration Covering Climate Now.

We are a voice for you; you have been a great support to us. Together, we are building independent, credible and fearless journalism. You can still help us by making a donation. It will mean a lot to our ability to bring you news, insights and analysis from the ground up so that we can effect change together.